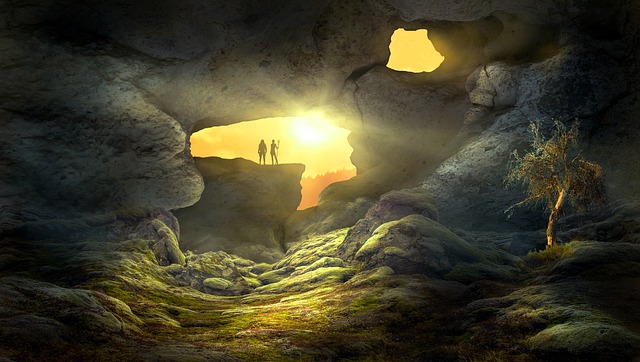 We spend a lot of time sitting near a screen: mindlessly watching shows, movies, playing video games, or with e-readers, reading novels of questionable quality – all things generally thought of as entertainment.

I can’t deny that I’m right in the middle of this demographic.  And indeed, it can be a nice, entertaining way to unwind, relax, and step away from the stress and static of the daily grind.

On the other hand, it’s arguable (and others likely agree) that time spent this way can be a big waste.

I’ve certainly thrown away more hours than reasonable parked in front of the TV watching lame movies, or reading bad literature and dime-a-dozen, business-card-style self-help books on my tablet.

Now, by viewing this activity from a different perspective and through making better media choices, could we find more enriching value in the time we spend this way?  Could we be learning nuggets of wisdom from all this screen-exposure and free-reading time?

Stories are powerful.  Among other things, they can help you discover your true interests, provide direction, refresh the mind, generate ideas, introduce new possibilities.

Stories can, in certain cases, even bring hope, help overcome sorrow, and provide unique role models unavailable in the world of non-fiction.

By making a simple decision to consciously choose the stories you engage with, and deliberately looking for the lessons they contain, it’d definitely be possible to enjoy some of these benefits.

Early on, I didn’t consciously choose what I viewed or read.  However, I was lucky enough to get enthralled by a few particular stories that positively impacted my point of view, and, to a large extent, altered the direction of my life.

For example, for as long as I can remember I’ve always viewed my life somewhat like a quest.

Big events have significant meaning for me, almost as if they were destined or pre-ordained to happen.

Relationships are deep, profound, and special.

A certain circumstance acts as a key to unlock a greater, more challenging, more empowering set of experiences.  A higher power (or, God, as is the case in my belief system) has a plan.

It’s hard to say where this mindset came from for certain.

There’s a chance, however, that it may have been influenced to some extent by plotlines from some of my earlier media choices.

Let’s look at one example, and see what we can learn from it and how it applies.

In this game, you play as Link, an elf who is charged with defeating the evil Ganon, and rescuing the princess Zelda.

This was the first quest-type game that I ever played, and it made a big impact on me.  I was about seven years old when it first came out, and I remember dedicating countless hours to rambling through the 8-bit forest, shooting fiery arrows, and wielding the glowing sword projectiles.

From my perspective, there was a key overarching theme communicated continuously throughout the game which echoed messages such as:

Now, to the impressionable mind of a seven year old messages like this can be very profound.

Additionally, it’s arguable that there were also even more practical messages in this game.  Towards an earlier part of the game, you encounter an old man who gives you a sword.  While giving it to you he states:  “It’s dangerous to go alone.  Take this.”

So, according to this cartoon man, it’s important to have everything you need before you embark on an adventure.

This message may even have broader implications about how important it is to be prepared not only physically (by having the appropriate tools), but also mentally and emotionally as well.

A few other things that I potentially may’ve learned from this game were:

The primary currency used in the game is the Rupee.  Throughout the game you collect them to buy things.   When playing this game as a kid, I think this was one of my earliest experiences with the process of making and spending money.  At the time, I remember my parents joking about how this game was teaching me money management.  In reality, they probably weren’t too far off.

In the game, if your character dies, you must start over.  I died repeatedly in the original.  This tested my patience without question, but I kept getting back on the horse, kept starting over, and eventually won.  Persistence like this is key in life, of course, as well as video games.

The original game had a special method of saving since it included a battery of sorts.  If I remember correctly, saving this game entailed holding in the reset button while turning off the power.  If you forgot to do this, you’d lose your progress.  In a sense, this taught accountability.  Making sure everything is in order before moving on to the next task, etc.

A key part of this game is strategizing – knowing and selecting the right weapons to defeat a particular enemy, and having the proper equipment to survive.

Having the correct tools is of course essential in real life as well.  I would never go to work without my laptop, build a house without my hammer, or walk my small dog without his leash.

During my time playing this game as kid, I learned that to save the princess you had to have the courage to stand up to evil, stay the course, and defeat the evil Ganon – Chivalry, for lack of a better word.

Chivalry is perhaps one of the most important lessons of this game.  In order to have both of these qualities, one must focus on doing the right thing, being a good person, and taking care of others.

Because this post is getting rather long, I will only include this one example.

From the things I observed in this example at the young age of seven, I’m quite certain that my time wasn’t wasted playing this game.  The value here was twofold, the content of the media, and the way it was considered.

We can selectively do this with all our media choices.  By doing so, we can make more valuable use of our down-time.

Incidentally, the thing that made me think about using this example was a recent shopping expedition I took with my girlfriend.  She asked that I go with her early (at the crack of dawn) to the store to buy the new Nintendo Switch, and the newest installment in the Zelda series for this console, The Legend of Zelda: Breath of the Wild (the first day it was released).

After watching her play this new game for many, many… many hours, and also, in playing the game myself, I can say that I confidently recommend it.  It’s very well-done, challenging to play, yet not too hard, with a great story-line, and cool, unique graphics.

as well.  The portability of it is very convenient, and I’ve used it some on the plane, in the mornings while drinking coffee, or waiting for food to arrive.  I’ve included links (to pun intended) to both of these products below.

What are some value-added media choices that you’ve made recently?  What have you learned from these things?

1 Comment Share Tweet Share Pin It Email
Category: Uncategorized
Disclosure of Material Connection: Some of the links in the post above are “affiliate links.” This means if you click on the link and purchase the item, I will receive an affiliate commission. Regardless, I only recommend products or services I use personally and believe will add value to my readers. I am disclosing this in accordance with the Federal Trade Commission’s 16 CFR, Part 255: “Guides Concerning the Use of Endorsements and Testimonials in Advertising.”

Please note: I reserve the right to delete comments that are offensive or off-topic.

One thought on “The Life-changing Power of a Sweeping Narrative”

We use cookies on our website to give you the most relevant experience by remembering your preferences and repeat visits. By clicking “Accept”, you consent to the use of ALL the cookies.
Do not sell my personal information.
Cookie SettingsAccept
Manage consent