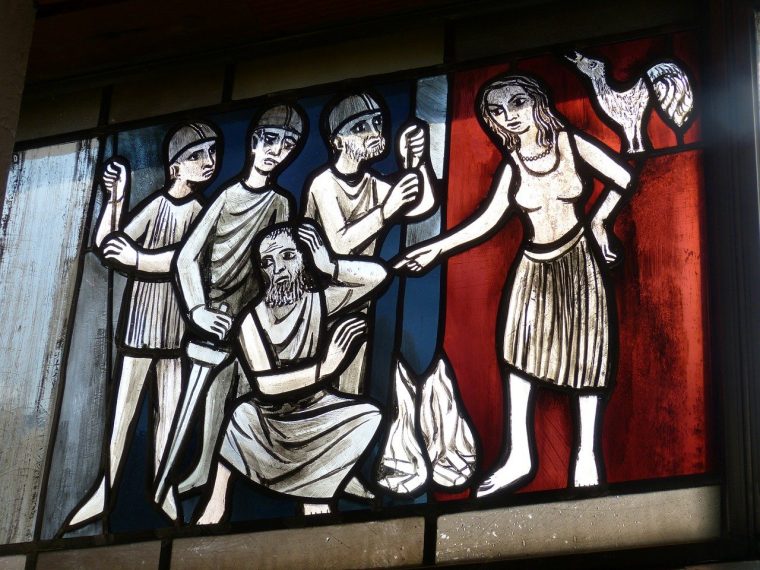 If you’ve never been betrayed by a friend, consider yourself lucky.

A betrayal, in many respects, is one of the more egregious things a person can do because it typically comes from someone to whom you’ve opened yourself up in a multitude of ways.

And in fact, misdirected vulnerability is one condition which lays the groundwork for betrayal.

An example situation could be when you’ve let your guard down with a particular person – and obviously, the wrong person.  And when you least expect it they lie to you, discard you, or say unnecessarily hurtful things, leaving you totally confused and wondering why.

And because you trusted this individual, your defenses were down and your “armor” was left at home.

But this isn’t always the worst of it.

It’s in the weeks and months following a situation like this that your mettle is often further tested.  Your mind and heart may filter through all the reasons why this even happened.  At the same time, you may even start to think that you’re the one who’s at fault.

Questions may come to mind such as:

From my experience, proceeding down this line of inquiry doesn’t make the situation any better.  And in fact, it’s part of a larger series of mistakes people often make once they’ve been betrayed.  Let’s cover these mistakes now, and consider some different ways to think about the concept of betrayal.

Mistake #1: Thinking that it’s their fault

Inherent to its definition, if a betrayal is truly just that (a betrayal), it means it isn’t your fault.

The decisions the betrayer made were theirs, not yours.  However, if you’re of a trusting nature, you likely think you played some role in the situation.

Now, let me tell you – there’s nothing wrong with being trusting.  In a perfect world we should be able to trust all people.

But unfortunately, a betrayal means that someone took advantage of your kindheartedness, broke your trust, and acted upon their self-interest alone.  And as you and I both know (and as many soon find out living life), you can’t trust everyone.

The prime advantage of correcting this mistake is that it helps to differentiate the betrayer’s actions from yours, which is a benefit from a self-awareness perspective.  It also helps to take unnecessary guilt out of the mix.

Mistake #2:  Trying to fix that which is beyond repair

I don’t know about you, but when someone has showed me a hint of disloyalty I immediately begin to think about them as a person who is no longer worth my time.  Reason being, disloyalty is of a more of a deep-seated nature than other things.

Perhaps I act too fast in this regard.

But in my mind, disloyalty is a character flaw on a fundamental level.  Consequently, it’s something that will probably take a lot of work to fix.

Many people aren’t willing to do that type of work.

And that’s all the more true for those who haven’t expressed any sense of regret about the whole ordeal.  But overall, it’s important to ask yourself whether it’s worth your time to help them do the work.

I don’t know about you, but my time is valuable and I have better places to be.

That’s not to say that disloyal people can’t change.  But you needn’t feel that it’s your responsibility to try and fix them.

There are basically two types of mindsets which foster this mistake.

One is when people don’t make the effort to establish new relationships because, once they’ve been burned they become jaded.  They see everyone as someone who might betray.

And that’s an inaccurate view.

There are a lot of great, loyal people in the world who are truly caring, and worth your time.

The other type of perspective which influences this mindset is when people think the person who did the betraying will someday “come around.”  And of course, some people do.  And there’s nothing wrong with hoping that they do.

But it doesn’t mean that you need to wait around for it to happen.  Chances are, people who are apt to betray need to do some major self-reflection and go through some growth – whether temporal or spiritual.

And it’s not something you should have to wait around for, and there’s nothing wrong with making new friends.  A true friend (new or otherwise) can be a great source of comfort and counsel – two of the most important things in life.

Mistake #4: Lingering near the “scene” of past events

When stuff goes south, I’ve always been a proponent of the “get out of Dodge” mentality.

What this means is, if it’s clear that no positive action can be taken in a particular situation, and you have the means and wherewithal to take some time away to relax and reflect, you might discover some positive benefits.

This could entail taking some approved PTO, going on vacation, or even visiting and staying with a family member for awhile who loves you.

Lot of opportunity here in that this can help renew your perspective, allowing you to see the entire situation in a better, more constructive light.

Mistake #5: Failing to recognize the value they bring

There is hope for tomorrow.

These are truths that cannot be denied.

But some of us have a tendency to miss the forest for the trees, and over generalize.  We think that since it didn’t work out with one person, one friend, one lover, it won’t work out with anyone.

If you’re the type of person who values self-improvement (and you likely are since you’re reading this blog) that couldn’t be further from the truth.

Along those lines, one option here would be to consider this situation an opportunity to improve yourself.

We can all work on getting better.

And to be fair, perhaps the other person had certain expectations that weren’t being met.  If what happened was indeed a true betrayal, then more likely than not theses expectations were unreasonable.

And if, on the other hand, some of the fault does lie with you for whatever reason, you’ve been given a chance to see where and whether you did wrong (if you even did), and recommit yourself to doing better in the next friendship, relationship, etc.

All that to say, your value is innate.  And it certainly does not decrease because one person did you wrong, or you made a mistake.  Their actions have nothing to do with your value as a person.

A lot of people get confused about forgiveness.  They think they should withhold it because the person in question doesn’t deserve it.

And that may be true – perhaps they don’t.

But the thing is, forgiveness doesn’t have to be for them.

It can also be for you.

In fact, it may be essential to forgive if you really intend to move on.  Holding on to serious resentment won’t help you long term.  And depending on it’s intensity, it may carry over to your next relationship and lead to undesirable dynamics in the future.

Now, just because you forgive it doesn’t mean you need to forget.  If someone did you wrong, there may be value in remembering that in case you ever feel inclined to reach out to them again.

And there’s wisdom in the old adage that a leopard doesn’t change its spots.

What are your thoughts on this post?  Have you ever been betrayed?  If so, I’d love to hear from you.

Share Tweet Share Pin It Email
Category: Mindset
Disclosure of Material Connection: Some of the links in the post above are “affiliate links.” This means if you click on the link and purchase the item, I will receive an affiliate commission. Regardless, I only recommend products or services I use personally and believe will add value to my readers. I am disclosing this in accordance with the Federal Trade Commission’s 16 CFR, Part 255: “Guides Concerning the Use of Endorsements and Testimonials in Advertising.”
We use cookies on our website to give you the most relevant experience by remembering your preferences and repeat visits. By clicking “Accept”, you consent to the use of ALL the cookies.
Do not sell my personal information.
Cookie SettingsAccept
Manage consent